Why Even Bother Recycling in the first Place? 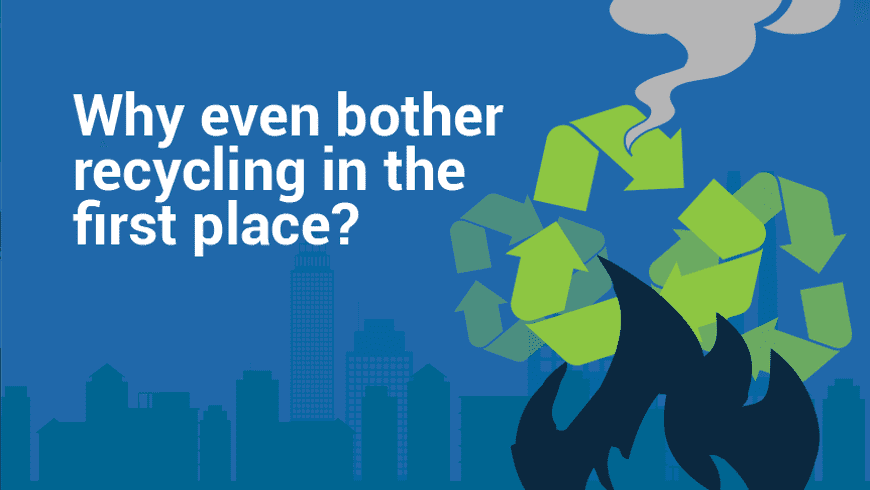 Why Even Bother Recycling in the first Place?

This question has been posed to us by several customers over the last few months, and not for the reasons you would expect. In fact, the question, whilst on the surface may appear as apathy, is, in fact, a response to the UK’s increased incineration and stalling recycling rates.

Communities are seeing their waste being burned for energy instead of being recycled, as they are led to believe it would be when they go to the effort of separating it. It’s no wonder they are up in arms, like the people of Aberdeen, who are protesting at plans for a new incinerator, which has now gone to a public hearing due to the level of complaints.

In Waterbeach, Cambridgeshire, a similar proposal has enraged local residents, who are so opposed to a £200m incinerator being built that they are campaigning and petitioning against it, in numbers. Wisbech, also in Cambridgeshire, has been touted as another potential site, and their own County Council are suffering infighting because of it.

Clearly, recycling is a preferable activity to incineration for residents, but not for the government or big businesses, so why is that?

Out of sight is not always out of mind, perhaps…

Recycling is higher on the waste hierarchy than incineration. If you aren’t familiar with the waste hierarchy, it has six steps, which are Reduce, Reuse, Recycle, Energy, Incineration, and Landfill. It is in this order that we should treat waste to cause the least damage to Earth, or, to be most responsible and resourceful.

Reduce is perhaps the hardest thing to measure, as it means going without, and unless we track and weigh our own recycling and general waste outputs consistently over time, it’s difficult to say if we are successful or not. With reuse, personal efforts can be very significant, but doing something like reusing a sports bottle instead of buying water bottles is not something that you can really put a figure to. Reuse reduces demand on production, and is thus preferable to recycling.

With recycling, it’s such a visible and physical effort that people form an attachment to the activity and their waste (as opposed to throwing it in the bin when it is immediately forgotten about), as is being proved from this recent community outrage towards incineration. Recycling gives hope to unwanted items.

To recycle is to give something a new life, the sentiment is very strong and visual, and when we separate our paper, cardboard, plastics, glass, tins and more, we can quite easily imagine these items becoming something new. This is part of the reason why we engage in recycling, to reduce the burden on the environment and to stop items from going to landfill.

The sentiment of incineration is very negative. Burning things means they are done and gone forever, and even if energy can be captured from incineration, the energy saved by recycling items is far greater.

The calorific energy gained from burning plastic is less than 10% of the energy savings of recycling, for example. But, more than the hard facts, the feeling of going to the trouble of separating your recyclables just to find out that your council is burning the waste is a form of betrayal. Why not just throw everything in the same bin and be spared the hassle, right?

Why even bother recycling in the first place? This question is poignant. Ask your colleague, friend or neighbour if they would still recycle if they knew their collection was going to the incinerator.

Some waste must be incinerated

We wish it was so simple that incinerators were not needed, but in fact, they do play an important role in UK waste, though sadly this role is much larger than it should be. Since incineration sits above landfill in the waste hierarchy, it therefore should be used as a preferable option; it should not be preferred to recycling.

We’ve discussed in the past that right now the UK is suffering a sort of waste crisis after China changed some of their waste import regulations, meaning we have more waste than we can handle, and are using incineration as a short-term solution to bridge our needs.

Here are the waste types that must be incinerated:

It’s true, there are no waste types that require incineration, though, in cases where recycling or reuse are not options, incineration should take place. Take wood, for example, in some cases it can be recycled into kindling, or it can be upcycled for other uses, but when it’s rotten, it can be burned for energy. The alternative, to put wood in a landfill, doesn’t really make much sense, when wood holds a lot of calorific energy. However, wood doesn’t go in your recycling boxes, so this is a moot point for most readers.

Hazardous or contaminated materials should be incinerated as to keep their potentially damaging properties away from people and the environment. Animal by-products and fallen stock are also incinerated to avoid rotting…

After the incineration process

The toxic ash produced by the incineration process ends up in a landfill anyway, often used in place of soil to create separated layers of waste under the ground. Before this happens, the ash is filtered for metal, which is taken to be recycled, though in truth, should never have made it to the incinerator in the first place if recycling was really the preferred method of choice.

The great truth that most waste management businesses won’t tell you is that the energy gained from incineration does not really make it a green option for waste removal. This notion is simply not true, as the activity itself discourages recycling and leads to greater wastefulness. Incineration is an ‘alternative energy’ source, but whether its positive or negative is up for debate; it’s more ambiguous than anything.

With the progress made in the last two decades in the UK to improve and educate people on domestic and business recycling, as well as construction recycling, it seems a huge backward leap to change the agenda from advanced research and development into recycling, to a push for incineration. People are separating waste to see it recycled, not burned, it’s as simple as that. UK recycling rates are literally going up in smoke, with our environmental ambitions as a nation disappearing in the wind.

We are leading the charge for more Earth-friendly environmental services and behaviour, and to do that, we need the backing of the government to continue with the Reduce, Reuse, Recycle mission, and not fall deeper into the hierarchy, with pursuits that will lead to incineration and landfill usage growing.

The UK Government has a responsibility to its people, who pay a lot of council tax towards their municipal waste service, to be honorable in their intentions and to recycle waste instead of sending it for landfill. Saying this, we are in a very current predicament regarding China, and so we hope that incineration remains a short-term solution, and not a long-term one. We believe the government should be investing in recycling facilities and technology to cope with our growing waste problem, instead of looking to burn or bury it.