The Race to Reduce – What’s Going on in the World of Reduction? 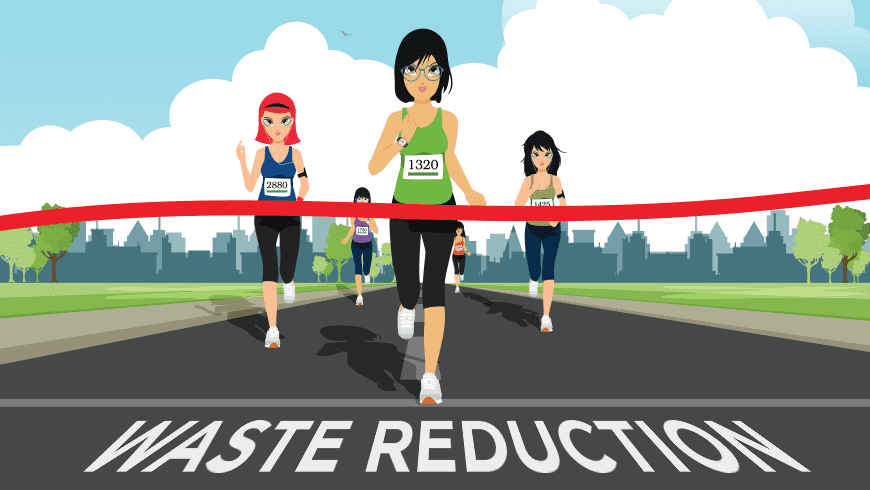 The Race to Reduce – What’s Going on in the World of Reduction?

It’s all go, all action, at the top of the waste hierarchy, in the world of waste reduction.

Recyclers are panicking, incinerators are brimming, and packaging companies are chewing their nails, expecting the day to come that new packaging legislation gets introduced. Straw manufacturers are fuming, plastic bag manufacturers are crumbling out of business, and disposable cup manufacturers are clock-watching as they wait for that inevitable call that their product is going to be banned (or at least restricted).

Waste reduction is the name, and tackling unnecessary waste at source is the game. Admittedly, it doesn’t sound like a very fun game, but it’s one we’ve got to play to help the UK become resource efficient.

We’ve compiled five of the best waste reduction articles to talk about in this piece, so that you can see the ins and outs of what’s going on right now…

When it comes to producing waste at home, most of the things that we throw in the bin have come from the supermarket. What doesn’t make it into the recycling containers or food waste caddy is often simply the remnants of supermarket produce. So, it begged the question, which supermarkets were doing the most (and the least) to support the waste reduction movement. Waitrose, you are the weakest link. Goodbye.

It’s true, Waitrose finished right at the bottom of Feedback Global’s recent study, with a score of just 8 out of 32 on their marking criteria. The aspects they were judged on included how they measure food data and their publishing transparency, the targets they’ve adopted to cut waste, what they’re doing to turn food waste into animal feed or redirect it to the needy, and what measures are being taken to make sure edible food is eaten, instead of being turned into energy (which isn’t actually a bad alternative).

At the other end of the scale, with 21 points out of 32, was Tesco. They scored highly for their contributions to food waste reduction in the form of:

The official rankings of the supermarkets scored goes like this:

EU challenges the UK to be the best!

After Michael Gove rudely (although perhaps fairly) said that the EU wasn’t doing enough to tackle plastic waste, they seem to have taken his insult, spun it around, and thrown it right back at him (in an episode that is being called Straw Wars). At the end of May, Brussels challenged the UK Environment Secretary to try and perform better than the EU with regards to plastic waste targets. Perhaps healthy competition is a good thing for ending unnecessary plastic waste!

Frans Timmermans, the European Commission’s first vice-president aimed this coy message at Mr Gove, among others, as he announced a plastic prohibition that will no doubt drive waste reduction forward:

“Worldwide this is the most ambitious and comprehensive legal proposal addressing marine litter. We can lead the way. We have to lead the way for our environment, for our health, but also to turn this into a competitive advantage for Europe. What I hope for after today is a race to the top, and I invite all those who said the EU is too slow – whether they are Michael Gove or others – to join us in this race to the top. Let’s see who does best at this.”

Later, when he was questioned about whether this related to what Gove said, Timmermans said: “Who cares as long as the environment wins?”.

We think he’d fit in well here at Enviro Waste!

Velocys, a very innovative renewable jet fuel company has announced that they have received £4.9m in funding to deliver the next stage of their waste-to-jet-fuel project in the UK.

Ok, so it’s not necessarily waste reduction at source, but by taking waste and doing something useful with it, it is a type of waste reduction, but the main reason we included this is that it’s not a small scale project.

The plant being built, a UK first, is going to take in hundreds of thousands of tonnes of waste that would have been destined for the landfill or incineration, and divert it into an operation that will create clean and sustainable fuels.

Compared with traditional jet fuel, the waste-to-jet-fuel will deliver a remarkable 70% fewer greenhouse gas emissions, and a 90% reduction in particulate matter emissions.

In the US, Grounds for your Garden has been a scheme for over 23 years, by which customer can get a free bag of waste grounds to use as fertiliser.

Now, in the UK, the coffee-chain is introducing the scheme with help from the Allotments & Gardens Council UK. The organisation are sharing the benefits of using waste coffee grounds for allotments, gardens and on farms, explaining that they provide a ‘great, long-term way to enrich soil and eliminate the need for other fertilisers, and they can also speed up the composting process’.

The scheme goes one step further, as the waste coffee grounds are handed over to customers in the empty bags that espresso beans are delivered in!

Ask in your local chain for more information.

This final coverage can be seen as a follow up to our recent article ‘A breakdown with China can renew confidence in UK recycling’.

When China blocked 24 more grades of low and medium quality plastic from entering their country, it caused a domino effect for most of the west. New avenues for waste exports were quickly found in Malaysia, Vietnam, Poland and Thailand. With this huge wave of waste heading their way (and here comes the unsurprising news) these countries introduced new waste import restrictions.

Instead of working hard to improve domestic infrastructure, we instead simply tried to divert our waste to other willing countries. Michael Gove said “We need to stop offshoring our dirt”, but then proceeded to take no positive legislative action. Ports are overstocked with waste recyclables, and we believe that instead of looking for the market to provide a miracle solution, waste should instead be turned around and sent to domestic recycling plants.

In the first 3 months of this year compared to first three months of 2017:

Source for these amazing statistics.

We may have finished on a sour note, but the other stories all show great signs of positivity for the world of reduction. Jet fuel made from waste, coffee grounds for your garden, the EU pushing the UK to do better, and supermarkets being held accountable for their efforts – these are all steps in the right direction.

Our core activities here at Enviro Waste involve taking waste from customers, and trying to ensure that waste is not wasteful. We want to take materials and ensure they get recycled, reused and repaired, and we want to change an old-fashioned and unattractive market place into a proactive, professional and cleaner one that has customer service and the environment at the forefront of its values.

We are supporting customers on their zero-to-landfill goals, and continuing to provide the necessary assistance for those who have already managed it. As the UK waste sector goes through a period of transition, mainly due to the legislative changes, there is a massive need for the companies within the industry to think creatively, to be adaptive, flexible, to be able to communicate and work as a team. As a company, we are constantly seeking fresh information to enable us to create new opportunities and to maintain that competitive edge. We commit to learning and developing ourselves so that we can develop the industry.