Ocean Plastic Waste Is Spreading Beyond the Oceans 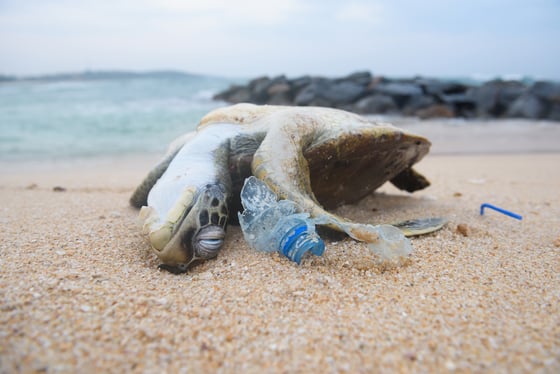 Ocean Plastic Waste Is Spreading Beyond the Oceans

When you throw a plastic bottle in the sea what happens to it? Firstly currents will carry out to sea and then it will start to degrade and the plastic break apart. All the plastic fibres that make up that bottle will stay in the sea forever in some form and will decimate populations of marine wildlife. However the dangers posed by ocean plastic waste is growing, it is now being found in drinking water around the world.

Scientists have analysed samples of tap water from a dozen countries and have discovered that 83% of samples were contaminated with ocean plastic waste. In the USA the contamination rate was 94%. Europe had the lowest contamination rate but it was still around 72%.  Scientists still do not know the health impacts on humans from drinking contaminated water however we do know what it is currently doing to marine wildlife.

The ocean is slowly turning into a plastic soup, larger pieces of plastic are choking and entangling sea life. However the real problems come as the plastic degrades into fibres. Creatures mistake these tiny particles for food and eat them, which clogs the stomach.  It can also lead to other intestinal problems, organ failure and even prevents some species from reproducing. Ocean plastic waste has permeated every level of the food chain, which means it is affecting more animals than ever before.

We cannot put an exact figure on the amount of plastic currently in the ocean but it is truly massive. Much of the ocean plastic waste eventually ends up as part of The Great Pacific Garbage Patch. Some estimates claim this is an area of ocean that is roughly the size of Texas but estimates vary with some suggesting the patch could be twice the size of the USA.

What Can Be Done?

4Ocean are another charity that is working to clear the ocean. They sell a bracelet made out of recyclable materials and for every one sold they will clear one pound of waste from the ocean.  The Ocean Clean Up is another group that are aiming to develop technology that will speed up the process of removing plastic from the ocean.  A Spanish clothing company also uses plastic fibres to make their products. They pay fishermen to collect plastic waste while getting in their catch.  This is an innovative solution but more needs to be done in order to stop the further contamination of water around the world.

We believe that increasing the recycling rate of plastic will further reduce the amount of ocean plastic waste. We are committed to the circular economy and using waste plastic fibres to craft new products is key to ensuring that plastic fibres do not enter the ocean.  If you want an environmentally friendly waste solution then get in touch and discuss your waste needs.

What do you think the long-term solution to ocean plastic waste is? Share your thoughts in the comments section.