Incineration Will Soon Overtake Recycling Rates. Is That So Bad? 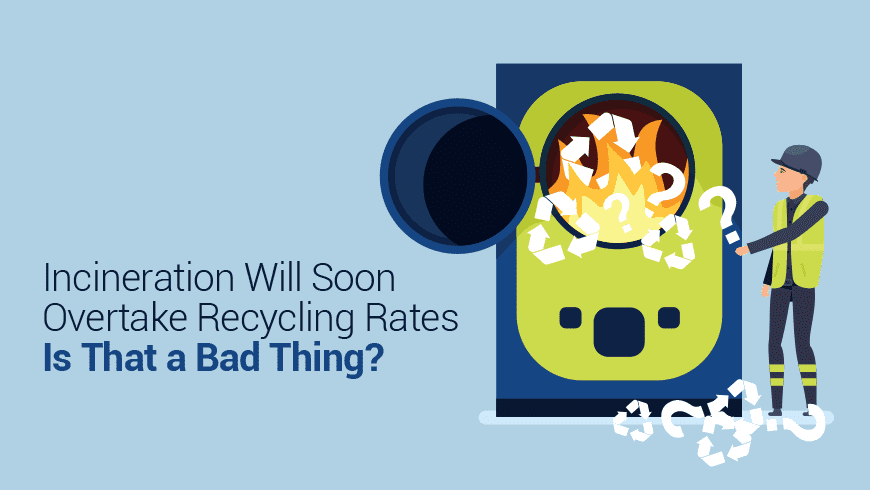 Incineration Will Soon Overtake Recycling Rates. Is That So Bad?

…and as it stands, there’s pretty much nothing we can do about it. Among the many environmental groups who are warning about dangerous air pollution created by incineration, perhaps the most vocal syndicate to draw up public support for alternatives is the Green Party, who recently outlined their findings in this excellent report.

How did we get to this position?

Believe it or not, we have only recently become an incinerating nation (the amount of incinerated waste has quadrupled since 2003) or at least allowed it to become culturally normal. Whereas other European nations are culturally supportive of incineration, such as Denmark, Sweden, Norway, and Portugal, the UK has traditionally held a negative opinion of the activity.

The journey to this point perhaps came when the government’s funding priorities for the waste management industry allowed incineration capacity to grow faster than recycling capacity. Perhaps people are bored of recycling, and the thought of sending their empty yoghurt pots to a flaming inferno of energy recovery inspires the imagination. Well, the former idea is highly likely, the latter is unfathomable, is there is a third and somewhat unexpected catalyst that has sent incineration rates soaring.

Our friends in the Far East are no longer friendly with our waste. They have elevated the quality limits of the recyclables that they will purchase and import to such an extent that their incoming waste from the UK is down by more than 90%.

The knock-on effect of China doing this is that the UK is now suffering from a very real and very sensitive waste crisis, which started in January 2018 and continues to escalate. Waste sits in ports, waiting for a country to take it, and as we reported in this article about the government’s influence on international recycling at present, we don’t even know what’s happening to it once it sets sail.

Incineration is a must at the moment

We don’t like it, really it should be a last resort before landfill, but we suppose, if you look objectively at the situation, we have perhaps have reached the last chance saloon. As a nation, we simply produce 2.5x more waste than our domestic recycling capacity, and we have done for many years. If we weren’t willing to increase the infrastructure, we should have done more to combat wastefulness.

Incineration has become the stopgap that we all hope will be exactly that – a stopgap. What would be unwise right now is for the government to pour money into incineration for a short-term solution, instead of into recycling for a long-term fix. Whispers coming through the industry, however, suggest that local councils have had to enter into long-term incineration contracts in order to tackle the mounting waste, so what happens remains to be seen, but it looks quite easy to predict.

Hold up – would becoming a recycling nation be such a bad thing?

Let’s take a look at our friends across the North Sea in Sweden. They’re an incineration nation, and they don’t seem to be doing too badly. One way that they differ from us is that they’ve managed to embed the concept into the country that incinerating is simply ‘energy recycling’, and whilst that’s a bit misleading, in Sweden it’s completely uncontroversial. When it comes to actually recycling materials, their statistics aren’t much better than ours, but the difference is that when they combine recycling and incinerating, they reach around 99%, the result being a lack of use for landfills.

The Swedish model uses incinerators to heat homes in the large cities, which is one way they’ve curried favour with their countrymen. Also, having that impressive ‘99%’ statistic allows citizens to talk proudly about their resourceful activities, and it only adds to the fact that Sweden is a net importer of waste (2.5+ million tonnes per year), often being paid to take the waste of other European nations, again turning it into heat energy.

The problem for Sweden is that they’ve always been an incinerating nation with a desire to climb the waste hierarchy and move away from incineration. The UK started further up the waste hierarchy, and are slipping down it. In effect, we are moving in opposite directions.

This extract talks about modern-day Sweden:

‘Newspapers are turned into paper mass, bottles are reused or melted into new items, plastic containers become plastic raw material; food is composted and becomes soil or biogas through a complex chemical process. Rubbish trucks are often run on recycled electricity or biogas. Wasted water is purified to the extent of being potable. Special rubbish trucks go around cities and pick up electronics and hazardous waste such as chemicals. Pharmacists accept leftover medicine. Swedes take their larger waste, such as a used TV or broken furniture, to recycling centres on the outskirts of the cities.’

25 years ago in Sweden, landfills were used more than energy recovery, and more than material recycling, but in the quarter-century since, they have completely squashed that figure to less than 1%, whilst more than doubling energy recovery and nearly trebling material recycling. The next 25 years will likely be spent moving away from incineration, and they’ve already started that movement by working closely with communities and waste management companies to do so. They’ve asked the question ‘How do we all work together on this?’. The answer remains to be seen.

What would the UK look like if it took on the Swedish model?

If we look objectively at the UK’s current situation and said that if we could increase recycling by about 7-10%, divert all waste going to landfills instead to incinerators and use that energy to heat homes, we’d arguably be in a better position, right?

The problem for us, however, is a sociological one. The government and various authorities have spent decades educating people about recycling, material separation, and the ongoing efforts to be more resource efficient. If we were to suddenly become an incinerating nation, we’d be going back on decades of cultural education, but it would also be encouraging a false notion that incineration is superior to recycling. Truly, it’s not, and we should be careful to remind the young generation now that the reason we’ve come to burn so much, is that our reliance on packaging has got truly out of hand.

You know our stance on landfill and incineration. We don’t like them. We only use them as an absolute last resort when every other avenue has been worn out. To think that the UK will soon burn more than it recycles is a shame, and if you agree with us, we welcome you to work with us. Our supplier-client partnerships are well managed, and they give you the added level of ecological protection and sustainability that your company culture wants and needs. Call us today and see how we are different, and going above and beyond to make resource efficiency a true priority.