The Best of GDPR – The Build-Up Round-Up 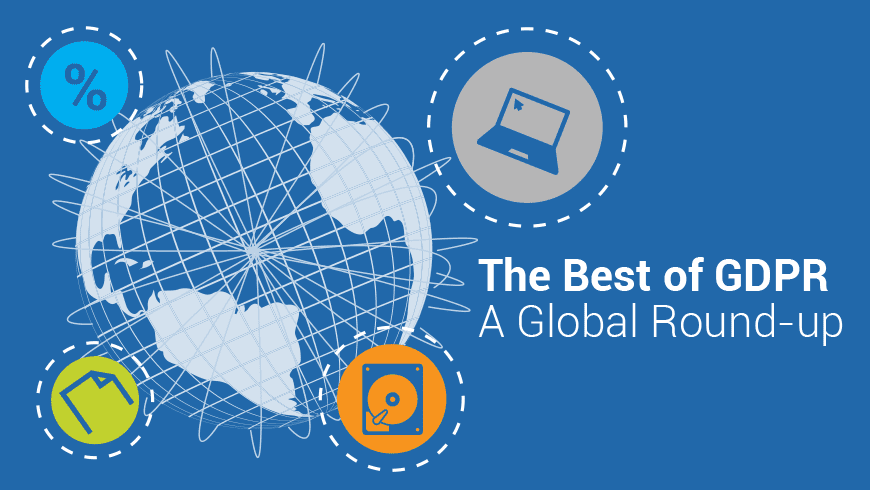 The Best of GDPR – The Build-Up Round-Up

Part of GDPR was designed to stop spam emails, but unless you were living without an email address, you will have noticed that the frequency of unwanted emails dramatically rose in the weeks leading up to May 25th.

Let’s hope that in the two months since, your inbox is comparatively junk-free.

Knowing that most email lists require an opt-in to keep their subscribers, businesses were pumping out desperate emails to get those all-important permissions. For some, this was part and parcel of the new regulations, but to others, it was a nuisance, and for some others, it was a chance to have a good laugh. In this piece, we are going to look back on what happened regarding the launch of GDPR.

People were more worried about reputation than fines

A recent survey from CRM systems integrator SeeLogic produced some very interesting results about the fears and concerns carried by those businesses who are directly affected by the GDPR changes. They put their questionnaire to a random selection of 150 UK SMEs, and found that 53% saw reputation damage as a greater concern to their business than the massive financial penalties that the GDPR governing body can dish out. Only 17% stated the fines to be their greatest fear.

Virgin Holidays are already on holiday with their GDPR approach!

Throw a towel on the sunbed and lay down next to Virgin Holidays, who were one of the few companies who decided not to bother with spamming their email subscribers to get opt-ins. Interestingly, they were following their gut instinct that those who were already subscribed and were not engaging with their materials actually provided no value to them and that it is a much better policy to spend their time pursuing new subscribers.

They accepted that most would unsubscribe, but they didn’t really care. Perhaps they were on to something? If the majority of your profits come from first-time customers, and not from returning business, is there much point in allocating budgets to retention? For Virgin Holidays, GDPR has given them one less thing to worry about.

60% of businesses see GDPR as a positive opportunity

Here at Enviro Waste, we were actually a little bit excited for GDPR, and the potential it can bring. As well as giving data rights to individuals, it opens up a new market for compliance providers. Beyond that, more than anything, GDPR is a necessary introduction to replace a directive that existed when people were still using Windows 95 desktop computers!

IBM opened up a poll to 1,500 business leaders in 34 different countries to gather their sentiments and discover whether GDPR was seen as a boon or a burden. Interestingly, 60% of businesses stated that they were excited for GDPR, 70% stated that they were disposing of data, 78% had reduced the access to their recorded personal data, and 80% reduced the quantity of personal data collected and kept.

Roughly half of UK & US businesses were compliant by May 25th

Another survey (there’s a theme to this post) just before the regulation changes revealed some interesting data about where companies were at in the GDPR transition process. The research was conducted by McDermott Will & Emery, a Chicago-based law firm, who wanted to see not only how the UK was getting on, but how well those in the US were transitioning too.

The results were a little worrying, but not panic-inducing – only 52% of those surveyed said they expected to be compliant on May 25th, with 40% hoping to be compliant soon after GDPR begins. The other 8% were not sure.

‘Excuse me, do you have just a few precious moments to talk about… GDPR’ the compliance officer said, with a compliance guide tucked under this arm.

GDPR will introduce new words and terms that are likely to become commonplace for anyone, or any business, handling data. Here are a few you might want to learn:

Here are the rest

It’s been two months since GDPR was introduced, and soon those months will turn into years. In these early stages, the results of the change look promising. Inboxes are clearer, there are fewer reports of spam, and the overall quality of emails has noticeably improved. Perhaps people panicked for nothing?

Here at Enviro Waste, we provide an effective compliance solution to ensure that all of your items and material that require disposal are handled professionally, and the disposal is carried out in an efficient and secure way. Contact us today to discuss further, and allow us to conduct a quick survey to see how we can help you kow and in the future.