Fly-tipping in 2018, Recent News and Updates 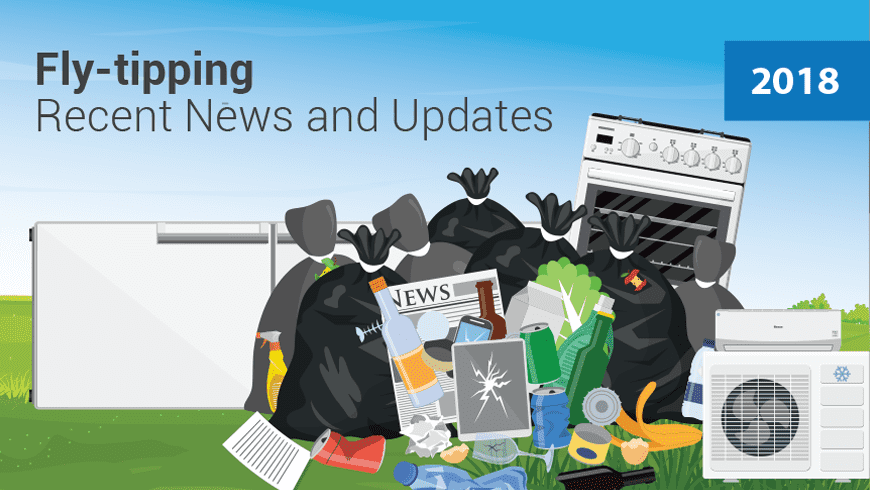 Fly-tipping in 2018, Recent News and Updates

Fly-tipping is a dirty and illegal act, and whilst we get paid to clean up fly tip sites, we are completely against them, from a moral and environmental standpoint.

We want to be a part of the side of history that fought against illegal waste dumping, and one way to do that, we feel, is to create more awareness for the industry’s news, and any law changes that may take place. Knowledge is power, after all.

The more people know about fly-tipping, the better prepared they can be to fight against it. So we have put together information about the three most recent and contentious pieces of news on the fly-tipping topic for you to read and consider. We finish up with a story about fly-tipping that happened to us.

The UK government are on the verge of introducing a new system of fines, with the aim of reprimanding those who use unlicensed waste carriers that are caught fly-tipping. Until now, fly-tippers would be taken to the magistrates’ court, in a process that could take months, rack up costly bills, and would not always provide the outcome that was desired.

Under a new penalty system, on-the-spot fines of between £150 and £400 can be handed out by Environment Agency officials to those caught fly-tipping. The extra strength and power given to those responsible is designed to encourage fly-tippers to use landfills instead of taking the risk of illegal dumping.

Whilst this proposal is likely to be adopted nationwide, it is rumoured that it will be voted for on a council by council basis. Putting the financial burden on those who procure the services of unlicensed waste carriers is quite wise, as waste gangs have become competent at dumping waste in places where it is difficult to be seen or caught, such as lay-bys, fields and country lanes.

Could this spell the end for the rogue ‘man and van’ waste operation? That remains to be seen.

Ommegas Services Ltd in Middlesex has earned the unwanted recognition of being the company to receive the highest fly-tipping fine ever in the area of Brent, and also the highest ever publicly-known fly-tipping fine. Total amount came in at £36,572.50. The previous record had been held by a meat company in Birmingham, and was around £25,000.

“The outcome of this case clearly demonstrates just how utterly unacceptable illegally dumping rubbish is in Brent.”

“It should serve as a stern warning to anyone who might consider doing the same. We will always pursue all avenues to hold the culprits to account.”

What does it mean for illegal waste dumpers when the judicial system starts upping the ante and handing out severe fines to businesses? It provides a sound argument for the use of landfill, rather than fly-tipping, but more than anything, it gives a great incentive to improve waste practices.

The less waste produced, the better, for these businesses who either feel they can’t afford a waste management contract, or believe they can skirt around the law and cut costs. Improved recycling efforts, vetting the supply chain and working with specialist partners (such as ourselves) will cost less than these gigantic fines that are starting to pop up in courts around the UK.

It may be the case that the judge was making a strong example of Ommegas, but the truth is that we have no context of how awful this case of fly-tipping really was.

Man fined for letting his property become a fly-tipping hotspot

A homeowner with a property in Downend, Bristol has been fined £3,120 for letting a residential property he owned that had not been occupied since 2013 become a ‘secret’ fly-tipping hotspot. He was first served a Community Protection Notice back in September 2017, but chose never to start the required work.

In April, it was decided that he must pay a fine of £1500, another £1500 in council costs, and £120 for a victim surcharge. He did not turn up to court, but in his absence, it was made clear that he has until June 10, 2018 to clear the fly-tipped waste from the front and back gardens.

The council had tried many times to provide assistance and help the property owner, though he did not respond and continued to allow the property to become a local fly-tipping site.

We quoted and carried out some clearance works for a  fly-tipped site in Southeast London. They were commercial premises, in the process of being sold to a supermarket chain.

The initial clearance works we carried out were on behalf of the initial owner of the premises at the time, a property management group. They were under increasing pressure from the prospective buyer of the property to clear the site of all fly-tipped waste, in order to speed up the sale process.

The initial clearance works cost around £25,000. Soon after exchanging contracts and completing work on the property, the property management group removed their 24-hour security from the site. Within the next 48 hours, the site had been broken into and targeted again, only this time the fly-tippers had tipped twice as much waste in comparison to the first time. They left the new owner of the property with a £40,000 bill to pay for the newly fly-tipped waste on their property.

In terms of fly-tipping stories, we often don’t consider that the victim and the fly-tipped waste bare no relation, like in this case, where the new owner can be considered very unlucky.

Fly tipping is dirty, unnecessary, and is a very inconsiderate way of passing on your waste burdens to someone else, creating human and environmental victims. Enviro waste is always available to perform cleanups of fly-tipped sites, and can also provide expertise on how to prevent your land or property being targeted again. If we can help your site, or you need a responsible and fully-compliant waste management company to deal with awkward, sensitive or bulky waste please, do not hesitate in contacting Enviro Waste.