Enviro Waste: Our Mission in the Media 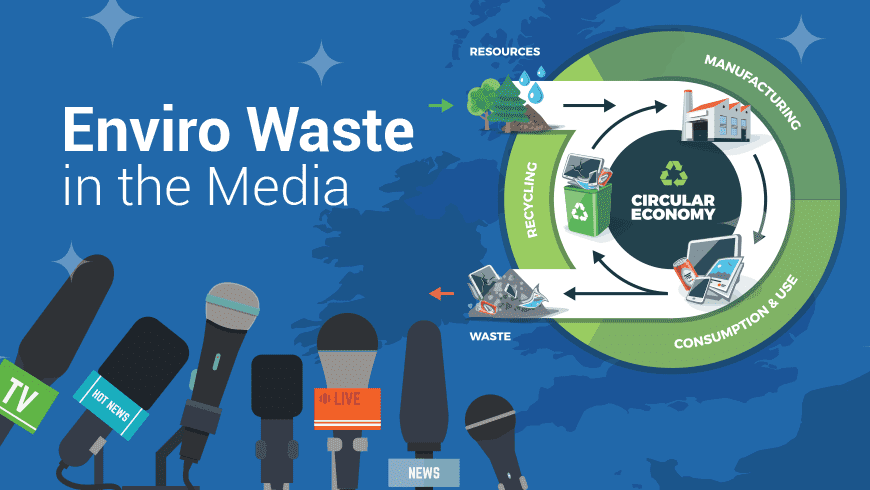 Enviro Waste: Our Mission in the Media

Over the last few years, we here at Enviro Waste have been very vocal in our attempts to help make the UK perform to a higher environmental standard. This desire to be the change we want to see in the industry has been reflected in the media, with James Rubin, founder of Enviro Waste being invited by the BBC and other organisations on several occasions to make comment.

In this article, we will be looking at a few of our moments in the media and giving some added context.

BBC Inside Out – London, WEEE and the Circular Economy

Enviro Waste Founder James Rubin was invited on to BBC Inside Out London to talk about the Circular Economy model, changing mindset and behaviours towards waste, changing the status quo in the industry thanks to generational differences and how to approach new waste streams, namely electronics. The BBC was interested in our activities and the fact that our approach to waste is so ethical and scalable, whilst remaining profitable.

Watch the video or simply read the best quotes:

‘We’ve come into the industry when it’s time for a change, and we’re able to see the needs of the marketplace and build our company around that. So we’ve built our company around this circular economy model. So let’s not just treat a laptop as a waste item and then send it off for recycling, let’s actually value it. We try and repair, refurbish and upgrade it as quickly as possible, we will then work with IT resellers who will come and buy in bulk and resell items individually. ‘

‘We are of a new generation that understands electronic waste much better than the other generations, so the mindset that we have and we’ve built we can see what needs to be done with this new waste stream which has only really become apparent in the last ten years.’

‘Our impact only grows the bigger our company gets and the bigger the impact the better for the environment. It would make much more sense if the government said to companies like ourselves ‘you’re doing a good job, so here you are, get some help’. Tax breaks would help, but I don’t think that’s going to be around the corner anytime soon.’

Customers who wish to work with an ethical and sustainable business who really take care of waste and put the environment first would be well placed in calling Enviro Waste. Whilst our services may appear similar to competitors on the face of things, our approach is more personable and careful, giving you a friendly and trustworthy experience.

BBC – What to do when someone fly tips on your land

In this short expose on fly-tipping, we were called out to a small clearance job, containing some pallets, mattresses and hardcore. Almost 1 million fly-tipping cases were reported in 2017, a staggering figure, but a sad indictment of a nation whose waste management supply is failing to meet the demand. With landfills getting more expensive, and people willing to give their waste to unregulated and unlicensed carriers, it’s not a great surprise that opportunists will empty a van full of rubbish wherever and whenever they can!

Watch the video, or read the quotes below:

Our waste operatives turned up on the scene and said:

‘It could really have come from anywhere, which is why it’s so hard to find the guys who have done it. The guys who carry this sort of stuff out, they know exactly what they’re doing. They know they’re not going to get caught. They don’t just do it anywhere, they choose their spots. Anywhere there’s no camera, not lit well, no gated areas. So, any quiet areas are where they’re going to do it’

‘If people knew how often people fly-tipped and how much of a problem it really was, they’d never give it to an unregulated person. They’d always be looking for someone who is registered with the Environmental Agency, who is going to be disposing of the waste in a professional manner and going to be recycling it. Essentially, instead of tipping it in the nearest space where no one is, and we have to come and clear it up’.

Fly-tipping is a dirty and hazardous activity, and nobody should really have to clear up someone else’s waste. However, it happens, and we are ultra-responsive in dealing with it. We also take the time to recycle as much of the fly-tipped waste as possible, whilst also searching for evidence within the waste that could prosecute illegal fly-tippers. Call us on 020 3883 6563 if you have an urgent fly tip site that needs clearing responsibly.

BBC – OBE found in the bin!

Back in January 2017 we found an OBE medal in our sorting facility, which quickly caught the attention of the media. James was invited on to BBC 5 Live to discuss the process of finding the OBE, and trying to find its real owner, which has proved somewhat difficult…

Listen to the video or read the quotes below:

‘I got an email from one of the guys who works in our warehouse, one of the operatives, it was found in our sorting station.’

‘It’s boxed, and it’s got a leaflet attached to it with instructions telling you how to wear it and when to wear it.’

‘I’m assuming it would have come from a piece of furniture, maybe left in a drawer, under a bed or something like that. When the guys sort through the furniture or whatever waste it was contained in they must have pulled it out and thought ‘hold on, what’s that? OBE written on the top?’ and send me an email through.’

‘We’ve got emails coming to us from 50 to 60 different people just this morning to say ‘Ah that’s mine, my auntie died, she was an OBE’. So we’re going to have quite a task trying to find and pinpoint the person it belongs to’.

Was the owner ever found?

Yes, we did manage to find the relieved owner! However, we were asked to keep their identity private.

When doing house clearances, we take very good care and precaution with the items collected. We know what some other businesses are doing, and in all likelihood, they would never have found the OBE, it would have been sat on a waste pile for a long time and maybe even end up in a landfill. Our careful approach managed to salvage something very important.

Huffington Post, BBC, Guardian (and 80 other outlets) report on our Bone story!

We went viral! Yes, it’s true, an estimated 2.9 million people read our story about finding a bone of the apostle St. Clement in a house clearance.

Below is an extract from the Huffington Post’s coverage

A U.K. waste disposal firm is turning to the public for help after realizing that one man’s trash could quite literally be another man’s treasure.

The London-based Enviro Waste company claims its workers discovered a relic ― bearing a Latin inscription that identifies it as a bone of St. Clement, one of the earliest popes of the Catholic Church ― in a pile of trash collected from central London.

Employees reportedly found the wax-sealed leather case containing the relic while sorting through the trash to find recyclable items last year. On April 25, Enviro Waste’s blog called for suggestions from the public about what to do with the relic.

Religious relics are physical items associated with a saint or with Jesus Christ ― such as a fragment of bone, a shirt, or something the saint touched during his or her life. Catholics believe relics are vehicles through which God can work miracles. Relics are often kept inside churches and venerated by the faithful.

James Rubin, Enviro Waste’s CEO, told HuffPost he suspects the case came from commercial premises, but because workers collected it on a run through several sites, it’s hard to pinpoint exactly who disposed of it. Rubin said he’s seeking help from a U.K. university’s carbon dating laboratory to confirm the relic’s authenticity.

Rubin said no one has reached out to claim the item, but he’s heard from 150 people who have ideas about where it should reside.

“I had a few ideas where it should end up, with the British Museum being the best idea,” Rubin wrote in an email. “We have had a historic churches adviser in Central London recommend that it should be handed back to the Church of San Clemente in Rome.”

Please get in touch with our media team at: [email protected]