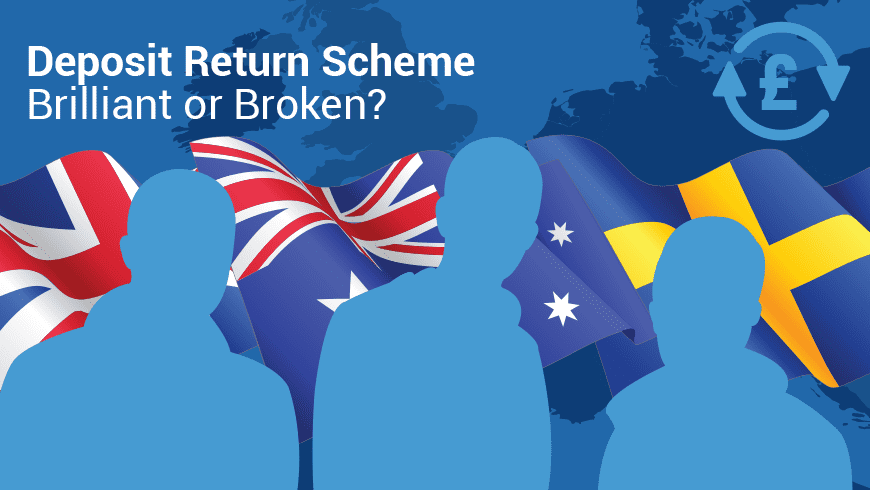 Here at Enviro Waste, we believe in transparency, not just about the waste and recycling industry, but about opinions too.

There are obvious flaws in the waste management system here in the UK, otherwise we’d recycle 100% of recyclables, nothing would go to landfill and we’d enjoy the benefits of a utopia. That’s not real life, so we like to face reality constructively, and see where we believe there are opportunities for progress.

This idea has been bandied about for years, but the movement is making a resurgence, especially after other nations have ‘successfully’ introduced or re-introduced it, namely our friends on the other side of the world in Australia.

To discuss this topic, we welcome Stephen Bourdet, Head of Sales and Marketing at Enviro Waste, who has many years of experience in the industry and knows first hand where the improvements could be. We also welcome James Rubin, Founder of Enviro Waste, who set up this business in direct response to the way it was being run and the huge opportunity for improvement that was evident. Our third voice is Joseph Kennedy, Founder of Content Pathway, the UK’s first Environmental Copywriting Agency, and a firm believer that there is no time like the present to enact logical and progressive change.

‘I’m going to be ultra-critical. I think a deposit return scheme is a half-assed idea, because it’s not actually curing anything, it’s just patching over the problem, but instead putting the responsibility in the hands of the people. Those responsible, the experts, the industry, and even the Government, should educate about waste reduction and the minimization of resource misuse. A deposit return scheme is too far down the waste hierarchy to really make a noticeable difference.’

‘I can remember, and this might be showing my age here, when a man came on a milk float selling glass bottles of Coke, milk and orange juice, and when he came around the next time, you gave back the glass in exchange for discounts. He took those bottles and washed, sterilised and reused them. This idea was great, but thirty years later, it’s gone out of fashion.’

‘The plastic deposit return scheme is not a new idea, nor is it really a great idea. Why are we using plastic in the first place? As a waste company, we want people to generate waste, because we can collect it and charge for it, that’s the business model, but we also have a responsibility to our customers and to the planet to want things to be better. This conflict arises, in that there aren’t enough outlets for waste and recycling in the UK, and they are decreasing in number, and then the problem compounds because of the growth of domestic waste. None of it makes sense, and I don’t think a deposit return scheme scratches the surface of the issue, it just distracts.’

‘From my perspective, we need to fix as much as we can when it comes to the environment. Providing incentives which reward people financially are key and only the Government really has the influence and power to drive this. Anything that is going to make the crazy situation with plastic better is welcomed.’

‘There are other ways that it could be done, I’m sure, but the way to tackle a huge problem is to progress one bit at a time. I think it’s Sweden or Norway where they have this system working already, so I don’t see why it can’t be applied here in the UK. Personally, I would welcome any incentive that helps to reduce the amount of plastic that ends up outside of the system, negatively affecting nature, like oceans and wildlife.’

‘I believe in some countries the retailers pay extra for the packaging, and in return they receive tax breaks, so it’s the Government essentially footing the bill. In this scenario, it wouldn’t be the taxpayer paying extra. I think it’s Norway or Sweden where 97% of bottles get returned for recycling. Germany has high recycling rates linked to this concept too.’

‘With anything, it’s want. It’s to do with awareness and consciousness, and how people think about certain things. It’s about how they act and what they want to do. If we were all recycling properly there would be no need for this scheme. So an authority needs to come in and say ’Right, what’s the financial incentive?’. If the taxpayer has to pay it, it’s not going to work. Humans are short-term thinkers, so why would we go out of our way to do something, and pay extra for it.’

‘There are fundamental ideas that can solve the issue more than just patch it over. What are we using to create the packaging? It all stems from the beginning of the cycle, not the end. We have to look at things with fresh eyes, and fresh optimism.’

‘I remember back in 2014, when the UK started investing in ‘reverse vending machines’ where you could actually put your plastic bottle or aluminium can in the machine and you’d get your 10p back. I thought at the time that it was a great idea, but it didn’t catch on. My issue now, looking back, is that unless there’s a nationwide adoption of these machines, it couldn’t really work, and if it doesn’t really work, then the environment is not benefitting – in fact, the only profit is going to the drinks companies who can charge 10p extra per drink – knowing that 100% of them won’t be returned, and the manufacturers of the ‘reverse vending machines.’

‘Whatever way this system is implemented, I don’t think it’s the environment that profits, and that should be the central focus. Those who go about implementing this scheme, they’re looking at data, statistics, and finances, not about the actual state of the environment. The consumers don’t profit from it, they just get the opportunity to get 10p back, which was their money in the first place. That’s more of a rebate than a profit. I also consider all of the extra road miles and carbon emissions for people manually depositing their recyclables. Is that more beneficial for the environment than a municipal collection service? How can it be? ’

‘A few years ago I interviewed Lisa Wriley from the Boomerang Alliance – she was heading up the campaign to reintroduce a deposit return scheme in Australia. At the time, there were only 60 reverse vending machines in the whole of Australia, and people didn’t really care much for the idea. I know that now there are hundreds of machines, and most of Australia’s regions have taken the idea on board, however, it’s been a bit of a disaster. In New South Wales, people spent $110m on deposits, and only $8.3m was claimed back between December 2017 and February 2018. The problem is that there aren’t enough machines, and so the public are pretty miffed at the whole premise of having to pay extra, but then having to go out of their way to get their 10 cents back. Like I said, the manufacturers of the drinks and the machines are the only ones who profit.’

‘It’s not only about the money though. In the case of New South Wales, only 7.5% of the drinks packaging ended up back in the reverse vending machines, and so what happened to the rest? Some will be recycled at home or at work, but a large percentage will have gone in the bin, proving that even money can’t buy responsibility. I see this as indicative of a social issue, and so reverse vending machines or a deposit return scheme would be a bad idea for the UK and would only cost the taxpayer more. No doubt the government would use taxpayer money to pay for the machines, and apathy would create a low return on investment. I think we need to go higher up the waste hierarchy if we want to solve this. We have to work with manufacturers and retailers, instead of shifting blame to consumers.’

Who do you agree with? Think we are all wrong?

Let us know in the comments below.