The Demise of the DMR Bin 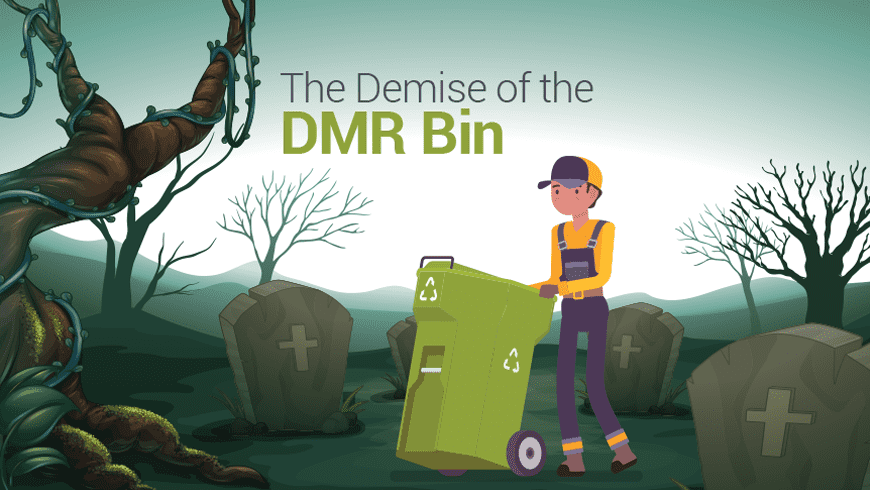 The Demise of the DMR Bin

Once upon a time…

The waste industry conjured up the idea of a single, comprehensive bin that could accept most of the commonly recycled packaging materials, like paper, cardboard, plastic, and cans. Thus, the Dry Mixed Recycling bin was born. But, the story doesn’t end there, as you’re about to find out.

So, what happened next?

What initially started out as a noble and ideal concept to deal with the multiple waste streams created by businesses around the UK, soon started to show its cracks and flaws. In the early days, there were two obvious issues, but 2018 has presented a third and fourth…

A DMR bin is a one-size-fits-all solution for a problem that is neither simple nor obedient, and so when that collected waste reaches the sorting facility, there’s actually more work to be done than if it was separated, and so a lot of confusion ensues. If the confusion, the workload or the sorting technicalities can’t be handled, it’s sadly all too common for this waste to get sent to the incinerator or landfill.

Contamination is rife with DMR bins, and that’s been a hurdle that the waste industry simply hasn’t been able to get over. It became quickly apparent that to avoid contamination, materials had to be kept clean, dry and separate, so to try and throw everything into one bin was always playing with fire (contamination). Think of it this way, if you’re a processing facility, and you have the choice, are you going to source your waste from separated waste streams, or from DMR bins? Right now, because of problem three below, the processors can afford to be picky.

As we’ve reported considerably over the last few months, China has stopped accepting most grades of waste. In fact, they let in just 2,500 tonnes of waste in the first 3 months 2018, which is an enormous drop from 88,000 tonnes in the first 3 months of 2017. Since China’s restrictions are now quality driven, pretty much any waste from DMR bins is forbidden, and the only way of selling recyclables to China is to have high quality, clean, top grades of material. That requires separation at source and a clear strategy.

The resale price per tonne of the materials from mixed recycling is at a very sorry low. Back in early 2017, we saw recyclers paying over £100 per tonne for things like plastic, cardboard and paper, but now we are seeing figures well below half that. In some cases, businesses have been giving away material for free, simply to clear space.

A big shift back

Having gone on this adventure of setting up businesses with new DMR bins, the concept is now declining, reverting back to the previous system, where different recyclable items were separated. This industry shift presents a great opportunity in the market for single-stream material processors, who can now begin to make partnerships with waste producers, and also for those who are championing resource efficiency and waste minimization efforts. The more we see reduced and recycled and the less we see incinerated and landfilled, the better.

Once we realised that DMR bin waste was going straight to incineration (or less commonly landfill) because of the four problems, we fully expected the bins to be rolled back, and that’s what has happened. Sending recyclables to the incinerator or landfill goes against the point of waste management. We hope that separating waste at source will improve local level recycling, provide a catalyst for the circular economy, support the local economy, improve stalling national recycling rates, and reduce carbon footprint thanks to fewer road miles for recycling.

How have Enviro Waste got around the problem?

We never got involved in DMR bins. We saw that they were problematic, we understood that they were not great for the environment, and we felt that the extra-sustainable wants and needs of our customers could not be met if we were doing mixed recycling. With our recycling rates at risk, we felt it better to make material separation easier, improve our guidance and literature, and work more closely with our customers to ensure that they have pragmatic strategies to keep wastefulness to a minimum.

What should you do next?

The domino effect of Chinese legislators has finally reached you, and your business is experiencing difficulties recycling certain materials, facing rising costs of waste management, suffering confusion over bins and contracts, and living with a sense of frustration when it comes to waste. Well, if all of that is true, we insist you get in touch today so that our account managers can work on a solution that meets your needs exactly, and goes above and beyond for the environment. After all is said and done, perhaps the demise of the DMR bin is a good thing.