The China Plastic Ban – Have We Responded Well? 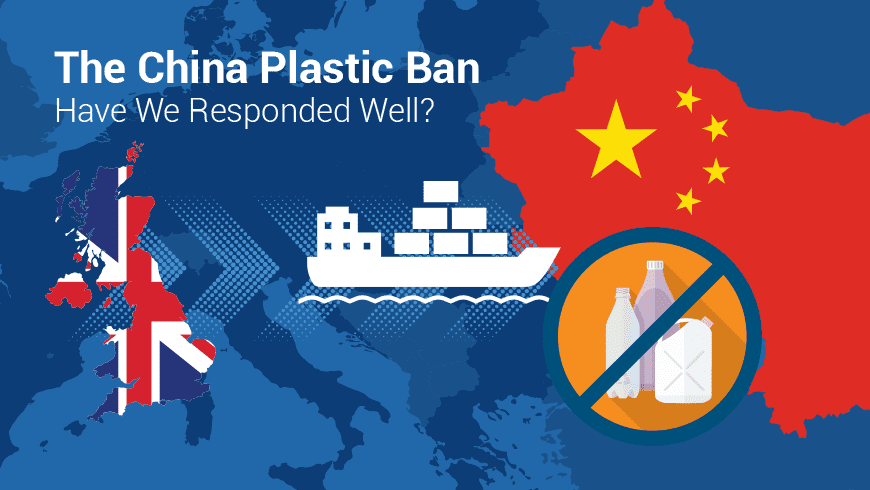 The China Plastic Ban – Have We Responded Well?

As we reported a couple of months ago when China began enforcing its latest plastic ban, we felt that this shake-up would be a huge boon to the UK recycling industry, offering an immediate wake-up call and opportunity that would break the shackles, kick off the cobwebs and get the cogs turning.

That’s what we are here to find out.

First, let’s get you up to speed

The current situation is the result of a series of legislative introductions by the Chinese government to stem the flow of poor quality scrap materials from entering their shores.

Where are we now, more than six months since China made their changes?

It all starts in Ipswich. Not the quiet town in Suffolk, but the Australian city of 200,000 people just outside of Brisbane. In April, they announced that recycling is simply too costly and that they would be sending everything to the landfill. China’s import ban has led to large quantities of contaminated waste ending up mixed with clean recyclables, and the cost to clean, separate and recycle is too high. The mayor says it’s quite clear that they have been backed into a corner, and that without China, the national recycling system broke down quicker than anyone expected. This is a worst-case scenario that we shouldn’t believe is beyond the realms of happening on Britain’s shores.

That is Australia. We are in the UK. The issue is exactly the same, except we don’t have the abundance of unused land that Australia does to create new landfills. We also have EU directives for recycling and waste management, and thus we are held accountable for our waste handling practices. Australia is only really accountable to its citizens. We face the same issue as Australia, both scrambling around trying to find a new alternative to China – but realistically, no nation is going to volunteer to take all of the contaminated waste. We also face the same issue as Australia in that our national recycling industry was not equipped for the loss of China’s facilities.

How has the industry reacted?

Short term diversions to Malaysia, Vietnam and India are helping us to get about half of our national material out there. Partnerships with Africa and some European nations are also allowing the industry to start building for the long term. Currently, a huge amount of plastic sits in ports around the UK simply waiting for a valuable market to open. We might be waiting for quite a while.

In other news, retailers, packaging companies, well-known brands and waste recycling businesses have all come together to create ‘The UK Plastic Pact’, a 68-member strong voluntary movement to support a circular economy by making all packaging reusable, recyclable or compostable by 2025. WRAP, who is the driving force behind this initiative, state that this is just one of many global networks who see the usefulness of forming such alliances. No doubt, this is largely in response to China’s recent import changes.

The pact arrives at a truly critical time for the domestic plastic recycling industry, who are inundated with material that is not very profitable to recycle. To support the industry, the Government is preparing a revision of the UK Resource and Waste strategy, which would force businesses to pay more for their packaging waste to be collected and recycled, in an attempt to get them to produce less.

It begs the question, what position would we be in now if we had sought proactive solutions instead of reactive ones? China’s plan for a circular economy has been transparent and understood for many years – it was never a secret. Why did our industry not look to replicate their great ideas and improve British industry, instead of trying to exploit China financially for as long as possible until the bubble burst? This systemic failure will live long in the memories of many people in the recycling industry as a ‘how did I not see this coming?’ moment.

Defra’s plan for a deposit return scheme is reactive, banning plastic straws is reactive, and even banning plastic bags was reactive. The true cause of the issue is a serious lack of government investment in infrastructure over the last few decades. Now, with perhaps the greatest waste issue of this decade on our doorstep, the Government looks to increase taxes on the packaging. It would be funny if it weren’t true.

What is Enviro Waste doing to support UK business?

We provide solutions to those businesses who wish to be more sustainable and environmentally friendly. To provide the best service possible, we regularly vet our offerings to make sure they offer unique or exceptional opportunities. When it comes to waste and recycling, we avoid the landfill where possible and use our strong domestic and overseas recycling partnerships to ensure that the market difficulties don’t affect our customers.

If you are ready to make changes in your business, in order to drive progressive change, we encourage you to give us a call and see how we can help you. Social, environmental and financial benefits are waiting for you…